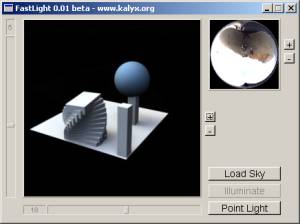 Fastlight is an algorithm that aims to interactively render a virtual scene in a natural light environment. We use spherical wavelets and pre-computed reflectance fields to make the computation time independent both to the rendering technique and to the complexity of the environment lighting. This technique is largely inspired by the work of  Paul Debevec and adapted to the field of augmented reality and real time.

Fastlight was first developed at the Institut Image and is now owned and maintained by on-situ.