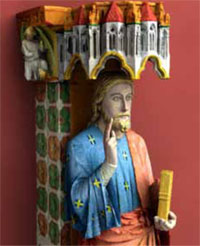 The Amiens Cathedral is the biggest cathedral still in place in France. In the center of the great central portal, on the pier between the two wings of the door there is a statue of Christ, the Beau-Dieu d’Amiens. This is one of the cathedral’s most remarkable statues. According to the legend, the sculptor had no inspiration to create the statue, God appeared at night and the next morning the sculptor was found dead, and the statue of the Beau-Dieu was at his side.

At the Cité de l’Architecture et du patrimoine of Paris, in the Galerie des moulages, the visitors can enjoy a molding of the Beau-Dieu d’Amiens at scale 1. It’s exhibited in raw white stone without the original polychrome. In order to be able to reveal the colorfulness the statue had in the Middle Ages, on-situ proposed a new installation: In front of the replica, a device restores the image with all its colors. In this case, as the room’s natural light changes throughout the day, we developed a mixed reality pipeline to show the simulation with exactly the same lighting as the real one.